Ah, another wedding weekend.  It’s almost weird to go to everybody else’s wedding, after you’ve had your own.  It brings back poignant memories of your own wedding, and yet, you can see how your own life has changed since your own special day.

This weekend was my second cousin’s wedding (the daughter of my father’s cousin, if that makes it any easier).  She and I are born 6 days apart…we’ve almost had a life-long competition instilled in us from our parents, but that’s another story.  Here’s a pic of the two of us: 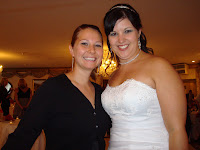 While DH and I had fun, he wasn’t feeling well, and we didn’t particularly know anyone there.  Well, a lot of my Dad’s cousins were there, but I haven’t really seen them since I was younger.

Regardless, there is still a certain charm in seeing people who love each other commit themselves.  It brings back memories of the day you committed yourself to your special someone.  And, being a little cynical, makes you wonder how happy they’ll be in 20 years.

I love watching other married couples at weddings.  Some seem genuinely moved by the newlywed’s public display of love for each other, while others seem jaded and just a little depressed to be there.  Hopefully in 20 years, DH and I are the ones still happy watching someone else’s wedding.

Also, the idea was raised that nothing tops your own wedding.  While I have to initially agree with this, my dad said that he had more fun at my wedding than he did his own.  (Awww, thanks Dad.  But really, don’t you think that set the tone with psycho-exStepmom?)  I do think that one can have a lot of fun at other people’s weddings.  But, once you have your own, do you always compare it with the ones you go to after?  Maybe it’s just me.  Or, maybe it’s because DH and I have now only been to two after our own.

Either way, I think that’s why everyone calls it your “Special Day.”  Because really, it is special to you…and no matter how cool someone else’s wedding is, it’s theirs; not yours.  While you get to share in their day, you lived your own.  Nothing can top that.